Now, let’s get down to the serious business.

Picking up our to-go breakfast from the Lenox Hotel at around 6:30am, our first full day of NB 1978 trip consisted of us being picked up by bus and taken 3 hours north across the states of Massachusetts and New Hampshire, and then into Maine, where the we headed to Norridgewock, a town with a population of around 3,300 people, and a New Balance Factory which opened in 1982. 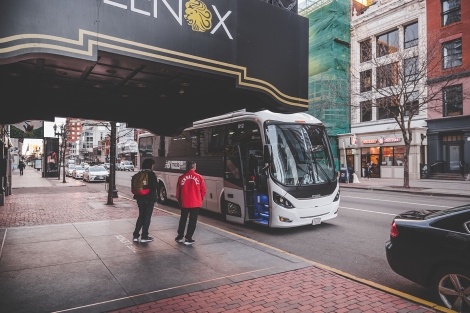 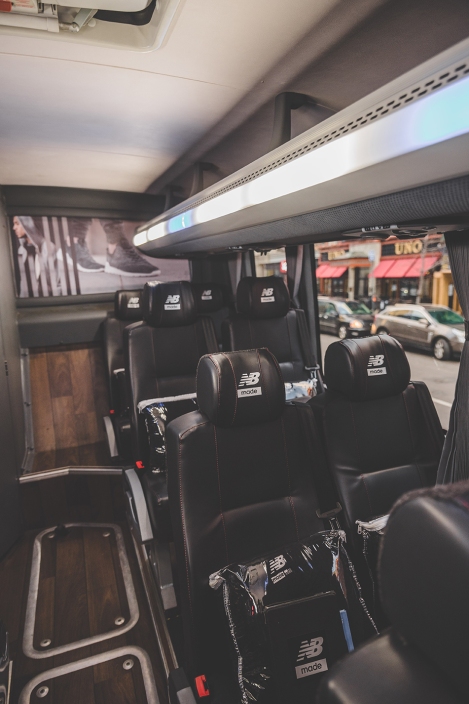 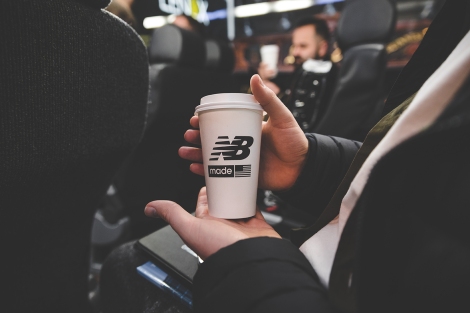 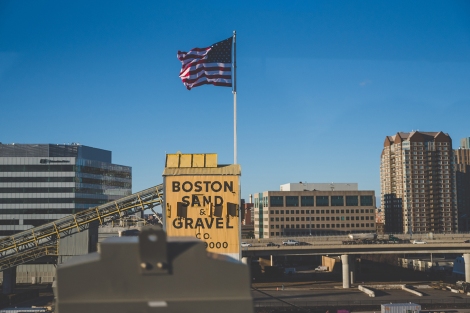 Doesn’t exactly sound like a fun morning, early wake up call, 3 hour bus journey, but there’s just something special about the journeys to these NB Factories, and it wouldn’t be right if they weren’t long and took you to some small town in the middle of nowhere.

To be fair, the bus journey was great, and that was mainly down to the company of course, as well as the trolley of snacks that was pushed up and down the aisle of the bus periodically.

Boston wasn’t exactly like the Caribbean when we left it in the morning, but it was free of snow, unlike when we arrived into Maine, the scenery had transformed into a baron landscape with high mounds of snow at either side of the road. 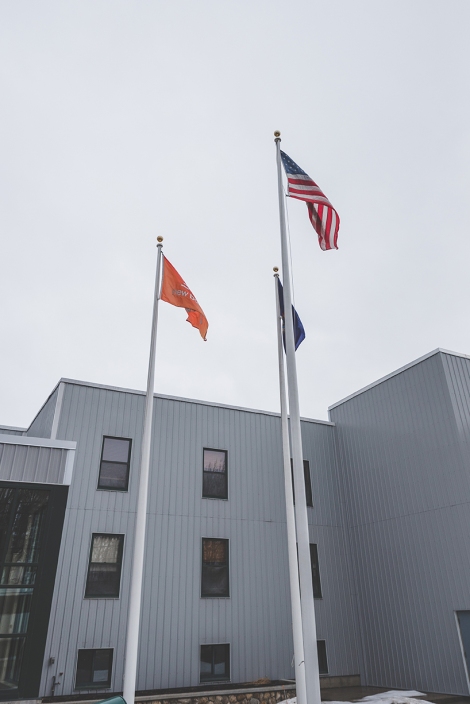 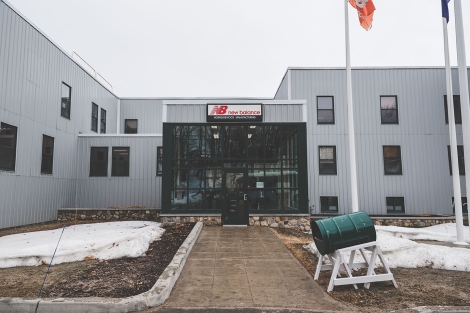 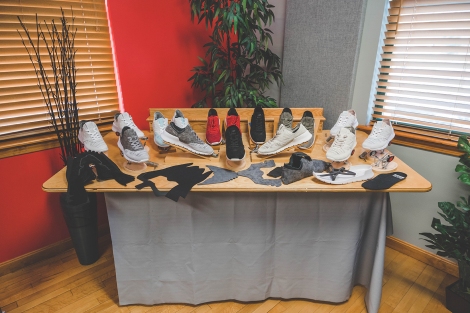 After an introduction at the factory, and some snooping around at the various NB MADE 1978 make-ups on a table in the room, Global Design Director Brad Lacey spoke with us about the NB 1978, from it’s inspiration, upper design, midsole, and colourway inspiration.

First of all, Brad started off with speaking about the inspiration of the NB MADE 1978, how it all came about, and then some details about it’s upper and how the Vibram sole unit came about: “The very first time making a shoe myself was – and I know this sounds cheesy – kind of spiritual, because you do this for 20 years and never get to jump in on it. You don’t realise as you direct things how complicated it is. So you think you’re doing really well at shoe school when you’re going down the line thinking you’re crushing it, thinking it’s so easy. But there’s this part of the process at the very end called closing. The most skilled people are down there on the floor. They turned me loose and let me run a freehand sewing machine down there and I really fucked up the shoe…pardon my French but it was completely mangled. This set me thinking about rethinking that complication. We began thinking about design for manufacturing – designing product specifically for how we make stuff today, not necessarily thinking about running faster and jumping higher, but thinking about lifestyle and craftsmanship.” 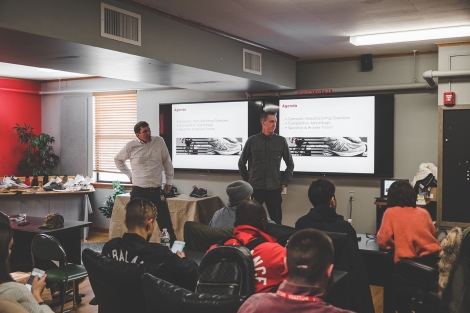 “I started looking at the legacy of the 990. That legacy of what it stands for is pretty special. So this guy Ken Graham was the original developer and creator of that shoe and he’s still here, so I talked to him about it and he’s a funny guy anyway, but as he talked about it I got more interested in what the 990 is about.

This shoe didn’t take four years to make, but I wanted to think like they did in 1978 with no limits to technology and how we constructed the shoe. I wanted to pay respects to how they were working back then, using partnerships and really embracing technology. So the guys at Vibram were incredibly useful. They told me at a trade fair that they had this amazing new compound that’s more durable than pretty much everything else. The original 990 had this Super Flex compound. I thought about that as a new process. Then I asked what the most efficient shoe being made in the factory is right now and it was the 990 V1. I asked for all the parts and pieces of the V1 and I’d guess there were maybe 30 components. I laid it all out and was amazed at the level of complication in the shoe even though it looks so simple. I wondered what we could eliminate and simplify. It takes a different kind of craftsmanship on the 1978, like leather cutting. Matching the leathers and cutting it is incredibly important and difficult. Then there’s the perf patterning – we were looking at this new technology that can do these really intricate perf patterns, so I started playing with that. The original 990, including the side profile, inspires the whole outsole design. It’s pretty faithful to the original.

I started it two and a half years ago. It took a lot of work. It was about six or seven months before we got a good upper sample. The tooling went pretty quick. There was a lot of learning. One of the reasons I wanted to do this project was to learn. We’ve been known for a certain type of shoe for a long time, but how far can we take things forward? You’ll see a lot of that going forward – we’re never letting go of the legacy though. Quality is inherent in everything we do.” 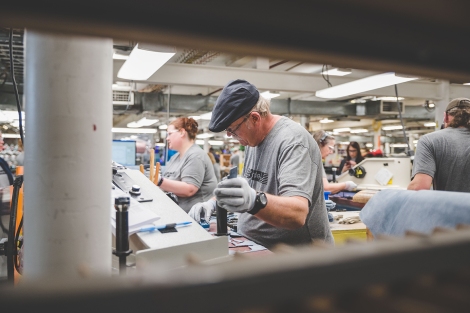 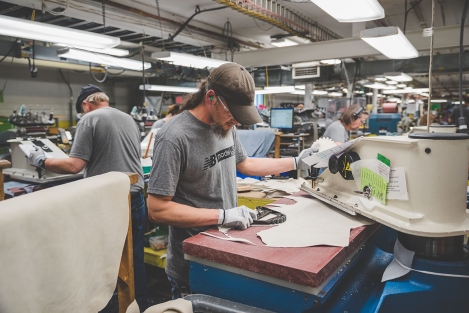 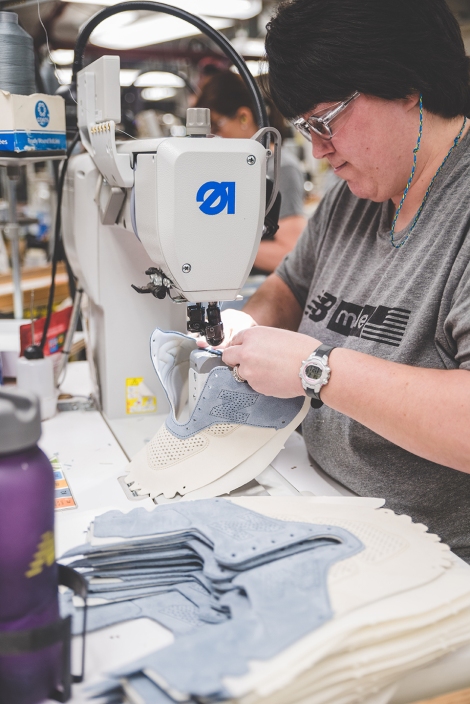 Like with anything New Balance do, they always look to their heritage for inspiration, and this is no different when it came to deciding which colourways they were going to run with for the NB MADE 1978.

Brad Lacey said: “The launch colours are inspired by the 730, 555 and 990 that were all around back in the day. The 730 was the most expensive shoe on sale at $70 when it launched, which was the highest price on the market. Jim Davis was getting all this flack from the sales guys, but we went on to sell a $100 shoe too – it wasn’t about the price but the quality. The 555 is my favourite trail shoe and I love that colourway. It was interesting in that time period – everything was blue and yellow from the German brands at the time, but this had these beautiful earth tones and that’s when things started crossing over. The grey of the original 990 and the 520 before it was there because it was considered the perfect colour for running in the city. They really thought things through.” 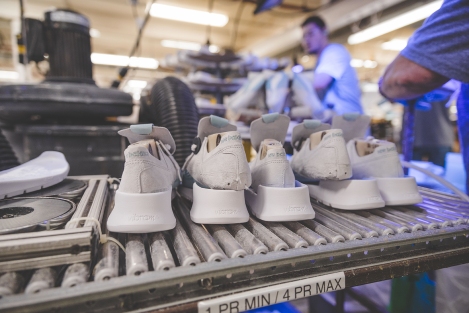 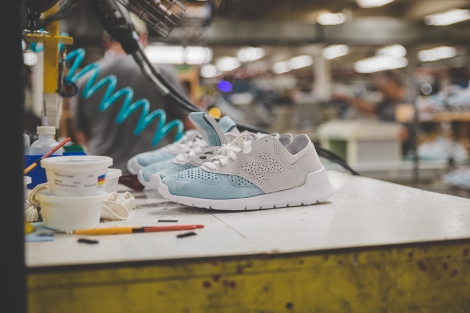 We then split up into groups and headed down to the factory floors where we were given a tour of the lines, with a specific focus on the 1978 line which was on the ground floor of the Norridgewock Factory. 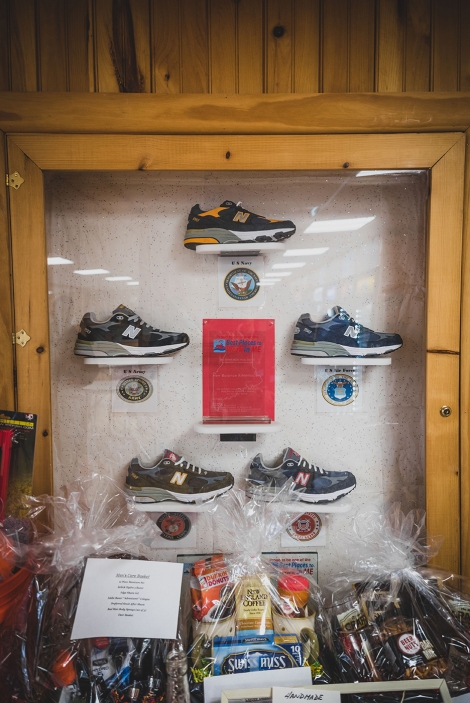 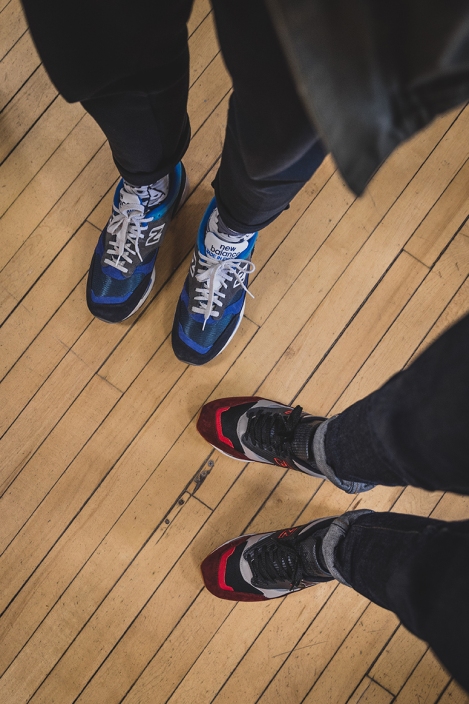 Check out some shots below from the factory floors, featuring an upcoming colourway of the New Balance ML1978, and a 990v4 thrown in for good measure too! 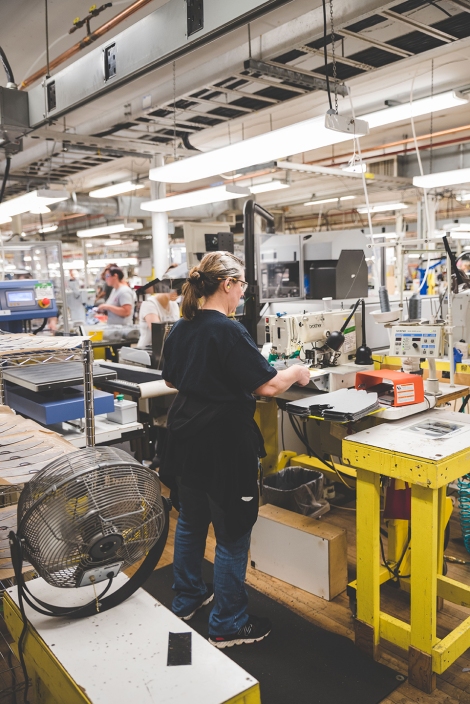 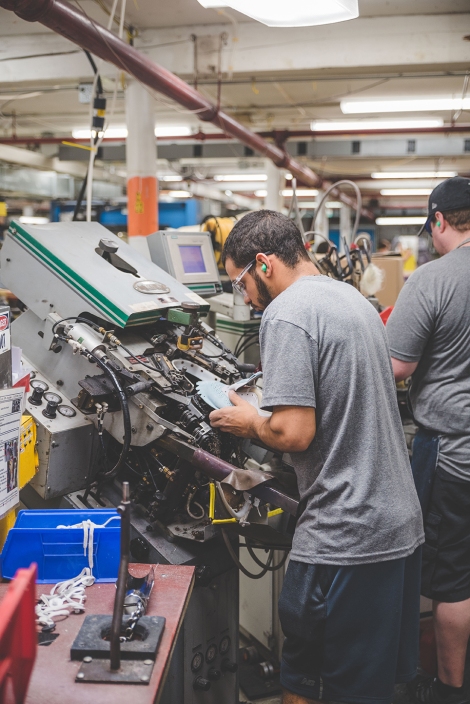 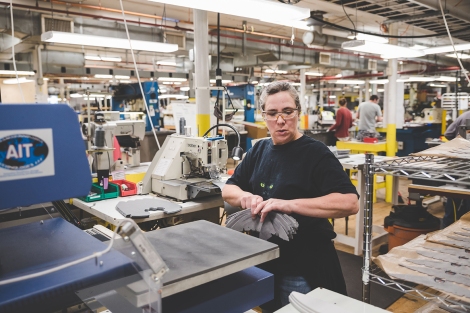 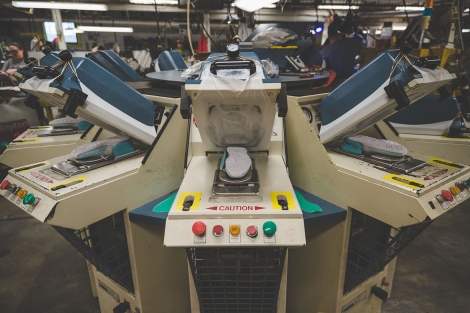 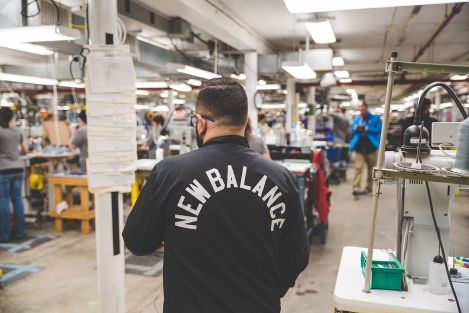 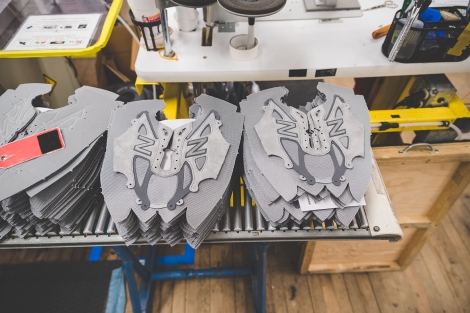 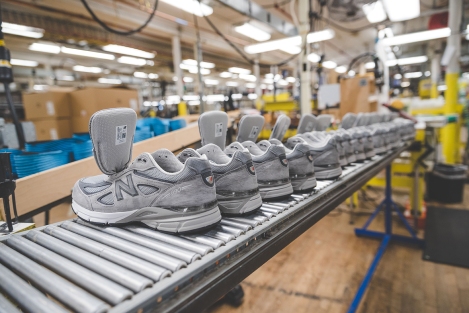 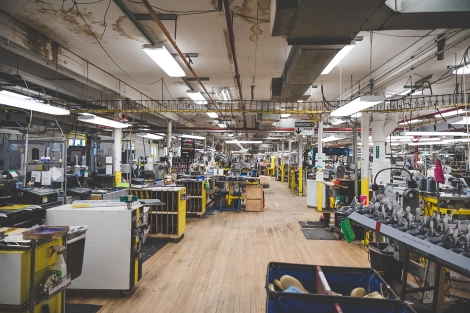 After getting a tour of the factory floors, we broke up for lunch, but were given the opportunity to revisit the factory floors if we thought we had missed anything, and at the point at which we had stood up ready to go back downstairs, Brad Lacey handed us the grail of all footwear books, the New Balance Origins Project.

This is a book that Brad himself started, and a book that literally does as it’s title suggests, it goes deep into the originals of classic New Balance shoes and it’s history, filled with a vast amount of valuable information that unfortunately is for internal use only with only 100 or so copies. I know, gutted, but it was great to even get the opportunity to flick through the pages of the Origins Project, even if all we got was a picture of the cover. 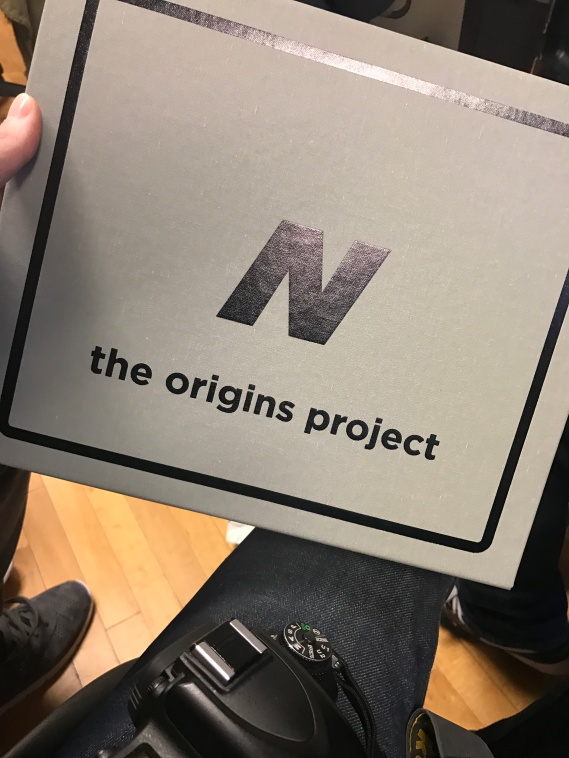 Shortly after lunch, we left the factory and headed back to Boston, and grabbed some rest before we headed back out for the NB MADE Experience Dinner at Post 390.

Day 2 complete, and looking forward to seeing what day 3 will be all about! 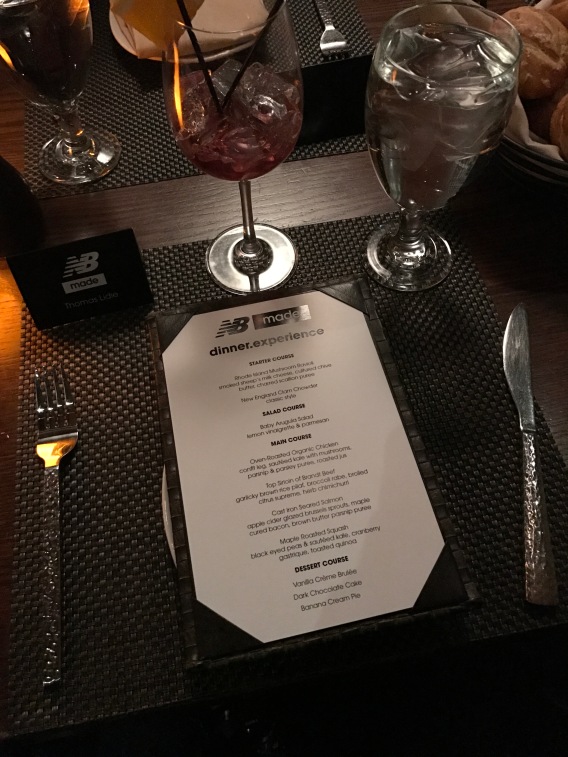