So after attending the Celtic FC Kit Launch back in May, we said that we would eventually bring you a post about the New Balance Football boots, and since we have the site up and running, it makes sense to do it now. Before we get started, let’s catch up on what has happened so far with NB Football…

Now, in terms of football boots, they officially launched two styles, which are both designed for attack minded players, however, they are differentiated by the style of play. 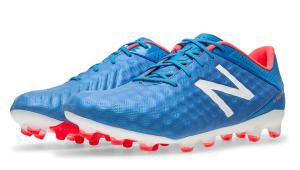 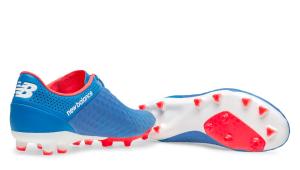 The New Balance Visaro is for players who have relentless drive and determination, and can slice through defences in the Ariaprene mesh upper, PU bonded top layer, debossed Sweetspot, asymmetrical internal heel counter, and burrito tongue for excellent ball control, as well as the lightweight nylon outsole with polished TPU Rotation Zone, and biomechanical stud placement, as well as a Super-Flex soleplate for exceptional ground contact.

It doesn’t end there though, because all of this upper is sat atop a Fresh Foam footbed, which provides superior cushioning, and a Pro-form last for unsurpassed feel and unbelievable comfort.

Of course, these players are playing a key role for the team, and they need to be able to turn fast, and change direction quickly, so a Medial Pivot Zone has been built to help them do this.

The pair pictured is the Visaro PRO FG (Firm Ground).

The New Balance Furon is for players who “Take Chances”, and are securing victory with those chances because they are in the right place at the right time. With the Furon, they can experience high speeds with the combination of the ultra light FantomFit Engineered High Energy Return upper, which is a synthetic and mesh cage, giving the players outstanding strength and support, as well as explosive release velocity. They can be nimble with the burrito tongue construction, asymmetrical internal heel counter, lightweight nylon outsole, and biomechanical stud placement.

Much like those who “Make Chances”, the players who “Take Chances” and wear the Furon play a key role in the team, and the TPU Acceleration Zone provides them with unparalleled acceleration to make sure they escape defenders.

All of the Furon upper is sat atop a fixed REVlite footbed, which provides superior cushioning, and a Pro-form last for unsurpassed feel and unbelievable comfort. The lightweight nylon outsole also features an ultra-directional stud design for unrivaled straight-line speed.

The pair pictured is the Furon PRO FG (Firm Ground).

New Balance have always been extremely generous when it comes to catering for people with wide feet, and that is no different when it comes to football boots, as the Furon and Visaro are available in 2E width.

We’ll be sure to keep you updated on all the New Balance Football developments, but for now, you should keep an eye on NB Football’s Twitter, Facebook, and Instagram.

One response to “New Balance Football – Visaro and Furon”