Melbourne based Up There Store have come together with New Balance Australia to commemorate 20 years of the 999 with the ‘99X Museum’. The museum itself will pick apart the entirety of New Balance’s 99X series with a historical archive from 990 to 999 and in-depth photographic retrospective. The 99X Museum started on Saturday July 2nd at Up There’s 15 McKillop Street location with the MRL999 Re-Engineered releasing the same day. The retrospective has also been captured in a commemorative book that will be released alongside the museum and be available for those that attend the museum.

The 99X Museum started on July 2nd at Up There Store, 15 McKillop Street, Melbourne, Victoria, 3000.

“In the five months leading up to the launch of the MRL999AG, the latest in New Balance’s historic 99X series, we have been putting together one of the most extensive collections of New Balance shoes for a museum display at our store in Melbourne, Australia. The idea was pretty simple: to show the evolution of the 99X series, not just to the committed sneaker collector, but everyone interested in brilliant and timeless design.

This collection of shoes isn’t just any old collection of New Balance. It is very specific. As a store we are very passionate about the 99X series. Spanning the better part of four decades, the line is by far our favourite from New Balance’s extensive archive. We love it because it has evolved and developed and is still as striking today as it was in 1982, when the 990 first launched in the USA. There is something to be said for objects and design that can still be treasured after so long. This is something that we, as a store try to bring to the market, through all the products we sell. It’s great to be able to work with a brand that sets such a great example.”

Thanks to the guys at Up There Store, we were able to provide a comprehensive history on the 99x series via our Instagram page over the last couple of weeks, but just in case you missed it, we’ll drop the wealth of knowledge on this post for you all.

The New Balance was first introduced in 1982. Some would say it was a huge risk for the company to take. It was the first $100 running shoe in the industry. With the first moulded Motion Control Device and a two density midsole, this was a huge investment in technology for the time.

With the roaring success that was the New Balance M990, the 995 was introduced to the market in 1986. It included subtle, yet significant changes.

1988 saw the release of the latest New Balance 99X model, the M996. In comparison with the minor update that was the M995, the new M996 was completely re-designed from the ground up.

1990 saw not only the release of arguably the most revered New Balance 99X model to date, but it also saw the departure of prolific designer Steven Smith.

1993 also saw the release of the M998, the first New Balance to feature the revolutionary ABZORB® (formally known as ENCAP® II) compound.

Following a natural progressive path, the release of the New Balance M999 in 1996 saw primarily evolutionary updates to the general aesthetics of the silhouette. One minor performance improvement took place, being the relocation of the ABZORB® compound. The compound was shifted closer to the point of impact, between the PU midsole and the carbon rubber directly in the ‘crashzone’ of the tooling.

1998 heralded a new design formula for New Balance and the 99X series, that would strongly influence a number of later models. This new formula debuted on the distinctive M990v2, moving away from the uppers that had previously featured in much of the series and introduced a new philosophy that saw the ‘swaybar’ replaced, underlay ‘web’ added and a moulded ‘bubble’ insert calling out ABZORB® on the midsole. 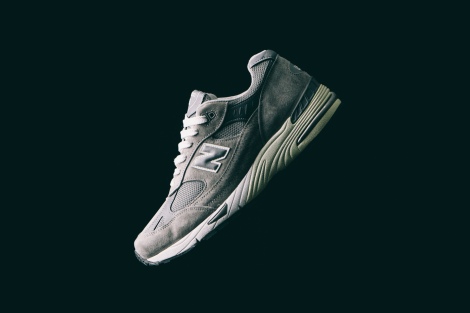 2001 was a big year for Jim Davis and his team. It marks not only the release of the progressive New Balance M991, but also the change in naming conventions, that would more accurately reflect the evolution of the 99X series, filling in the missing numerals between 990 and 995 (except of course, the mythical 994!). The M991 drew inspiration from its predecessor with the inclusion of inserts in the midsole, highlighting the ABZORB® cushioning compound. This initiative helped New Balance stay competitive in a market clamouring for technical edge.

In 2006 New Balance continued the introduction of innovative techniques with the implementation of ABZORB® Stability Insock technology present in their new M992. This was in addition to the evolutionary progression of the mid and outsole which featured Carbon rubber for maximum durability, a must in any serious running shoe. ABZORB® Stability Insock technology was implemented with the aim to improve fit and feel. Made in the U.S.A., the M992 can be produced in a staggering 78 size and width combinations.

The M993 refined naming conventions for New Balance moving away from the incremental numeric values (991, 992, 993), to a new ‘v’ or ‘version’ naming structure. This nomenclature will help catalogue the evolution of the franchise in the decades to come. Utilising the ground-breaking ABZORB® engineered foam, and the incredible responsiveness of the ABZORB® DTS (Dynamic Transition System) placed in the heel, the M993 builds on the craftsmanship of its predecessors. to top it off Ndurance rubber compound outsoles provide the wearer with superior cushioning. All this is superbly packaged in that monochromatic palette of grey, synonymous of a New Balance classic.

Marking their first collaboration with New Balance, Japanese retailer United Arrows & Sons put together the first two colourways of the 997.5 to be released to the market. Combining the upper of a 997 and the sole of a 998, a new model was added to the portfolio. The United Arrows collaboration consisted of two colourways, the first featuring the iconic grey tonal colourway and the second a vibrant grey, pink and purple livery. Both styles comprise of a variety of supple suedes and versatile mesh. Originally manufactured in Asia, it wasn’t until 2016 that production of the M997.5 shifted to the USA. A cross-cultured collaboration has ensued adding depth and kudos to the New Balance brand.

Collectors and consumers were treated to the New Balance M990v3 in 2012. This striking silhouette featured clean new lines incorporating premium pigskin upper with mesh inserts providing excellent breathability. A slew of evolutionary advanced technologies were embedded in its elegant design, including the stability-enhancing ABZORB® midsole, and the ENCAP® EVA cushioning system. Both sleek and functional, these elements work together to promote a healthy gait.

2016 sees the New Balance 990 continue its 30-year legacy of great performance and iconic style with the new men’s 990v4.

A perfect combination of cushioning and stability, wrapped up in a look that will last forever. A much anticipated release the world over, this is American craftsmanship at its finest. Featuring a lightweight pigskin leather upper with mesh windows giving this classic men’s running shoe its formidable appearance, whilst a combination of premium cushioning and stability deliver the feel that keeps you coming back. New Balance have included some restrained updates for this 4th generation rendition, that include a new streamlined “N” logo and re-engineered tongue design.

2016 marks the 20th anniversary of the MRL999. The whole series is universally acclaimed and continues to build its legacy and grow in stature. New Balance are both traditionalists and visionaries. Creating a thoughtful rendition of the classic M999 was an appropriate way to respect an icon of the brand’s design heritage. But it was also an opportunity to re-imagine the product with a very contemporary look and feel.

Past meets future in this skillful re-engineering. The classic lines of the MRL999 have been deconstructed and nuanced for a new generation of appreciative New Balance devotees. New lines and design elements ensure the MRL999 is not a pastiche of the original, but a fitting tribute which will surely open up its own new horizons.

We’ll have a full recap of Up There Store’s ’99x Museum’ opening event on the site very shortly so stay tuned to find out what went down, until then, we hope your head doesn’t explode with all that history that was just dropped!

One response to “Up There Store ’99x Museum’”