If you have even the slightest of interest in the footwear industry, then there’s almost no doubt that you’ll have heard about German heavyweights Solebox; a boutique run by brothers Hikmet and Suekret Sugoer, based in the Germany’s capital, Berlin since 2002. Over the years, this boutique has grown massively in popularity, and has amassed a huge following of local customers, as well as all those who frequent the online shop, and is widely regarded as one of the best sneaker boutiques in the world, a true testament to the work of all those at Solebox.

You get the feeling that Solebox was started up for all the right reasons, with a love of sneakers and community spirit at the forefront, and that’s been apparent constantly, with little things such as Hikmet’s continual online presence, whether it’s frequenting forums such as the once legendary Crooked Tongues, engaging on Facebook directly with the sneaker world, or the vast amount of excellent collaborations that they have worked on over the years.

Now that I’ve mentioned collaborations, I might as well get right into the thick of it, and you could compile a long list of Solebox collaborations over the years, with many of the heavyweight brands, but I’m going to specifically focus on New Balance.

Currently, out of all the New Balance collaborations in general, the Solebox ones are probably the shoes which seem to go for the most extortionate amounts of money, but it’s no surprise when you look at the models they have worked on and the colourways they have designed over the years.

Much like some of the other European stores, such as Hanon Shop and Sneakersnstuff, Solebox built up a strong relationship with New Balance UK and were one of the early collaborators, which seen a run of twelve released shoes, among the many unreleased samples. 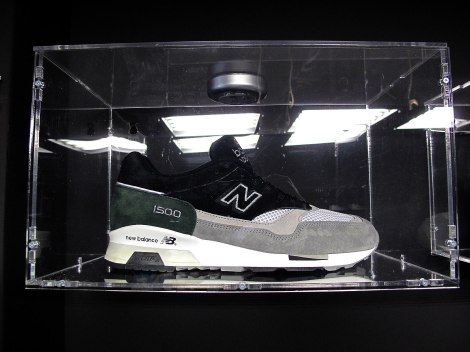 The New Balance 1500GGB “1of150” was the first of a long run of great collaborations between Solebox and New Balance, but there’s absolutely no gimmicks with this shoe, just an absolutely timeless colourway that speaks for itself.

The shoe features grey, black, and forest green suede with a clean white mesh toebox, white midsole and grey/black outsole. As the name suggests, there are only 150 pairs of this shoe, and to acknowledge this, Hikmet provided laces with Solebox and 1of150 on them.

Thanks to Decktwo/Thomas for the image.

The New Balance 1500BB x Crooked Tongues x Solebox “Bread and Butter” is ultimately one of the rarest pairs of New Balance to this date, with only 50 pairs released, however, there are a number of personalised pairs out there so we think the number may be a little more.

Nonetheless, the more the merrier, as this shoe is great, and it is the perfect product of when two great minds – Chris Law of CT and Hikmet of Solebox – come together to produce a stunning collaboration.

This pair takes it’s name from the Bread and Butter tradeshow at which it was released back in 2005, and as you might have gathered already, it was a joint collaboration between Crooked Tongues and Solebox, with the colour way inspiration drawn from CT’s website colours. The shoe features burgundy suede, black mesh, concrete coloured leather, the infamous carbon effect, gum outsole, and each pair came with a numbered metal lace jewel.

The “Purple Devil Pack” is some of Solebox’s finest work, and the style of colour blocking used has clearly inspired many brands and stores over the years. Another thing that I like about this pack is the use of the plum wine suede, as this is one of New Balance’s most notable colours, being used on iconic shoes such as the original 1500PW “Plum Wine”.

When you read through this post, you’ll start to realise that Solebox established a number of traditions while working on their New Balance collaborations, and one of those specifically was the all-white midsole with gum outsole, and the “Purple Devil Pack” was the first in the series to use that.

The New Balance 575BPW was the first in the series of the “Purple Devil Pack”, and each shoe follows the same style of colour blocking, material use, and midsole style.

This pair was released in May 2006, and 120 pairs featured the Solebox branding on the side, which you can see int he picture above.

The second instalment of the “Purple Devil Pack” was to be a 576, a iconic UK Made model, and one which many may have preferred after the earlier 575.

Again, the shoe followed the same colour blocking, material choices, and sole unit as with the 575, and the 1500 to come, but with a hint of 3M for an N backer. I think at the time, the 1500 from the series had already been announced but then delayed, so I guess it was for the 576, it makes sense, right?

This time around, Solebox had enough plum wine suede left to up the quantity of the 576BPW to 300 pairs, giving many more people the opportunity to own a pair.

The heavyweight of this pack, a shoe that really needs no introduction as it’s one of the most sought after pairs of New Balance 1500’s out there, and it’s no wonder really, as the Purple Devil colourway on this model is next level.

This shoe has everything, buttery plum wine suede, and perf suede on the toe box, lush leather, 3M hits and 3M piping around the heel, and the traditional white midsole and gum outsole.

In 2006, Solebox and Being Hunted came together to collaborate with New Balance on a pack of two 575’s named the “The Great Outdoors”.

To gain some background on the shoe, here’s a quote from Being Hunted themselves:

“While nowadays the design of outdoor apparel and footwear is dominated by the use of high-tech fibers, our concept was to apply to the shoes only traditional, well-tried materials such as cotton, linen, sheepskin, and various types of leathers.

For the actual design of our 575s we chose to distinguish between two general characteristics of outdoors acitivities: military and civilian. Our aim was to establish two very distinct and diverse fields which through the design could easily be identfied on both versions.

The third aspect that we took into account for the Solebox + Beinghunted collaboration was to incorporate an individual element that would directly refer to the members.”

The release of these shoes came in two stages, with Solebox releasing their’s first at the start of 2006, and Being Hunted following roughly a month later with their release. Both colourways were limited to 60 pairs each.

The 575SEW “Military” designed by Hikmet of Solebox used a Stricktarn fabric which is a camouflage used by the former East German armed forces, and the original camouflage fabric was bought in Berlin and shipped to Flimby for manufacturing. This sourcing of materials by stores for their collaborations was very common around this time. 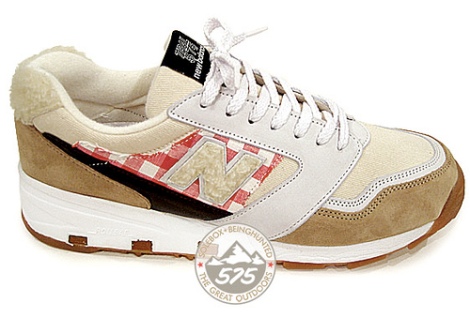 The 575BNW “Civilian” designed by Jörg of Being Hunted used a Gingham fabric which is commonly found in Southern German attire and as Being Hunted’s roots lie in Munich, this is where the fabric was sourced from. 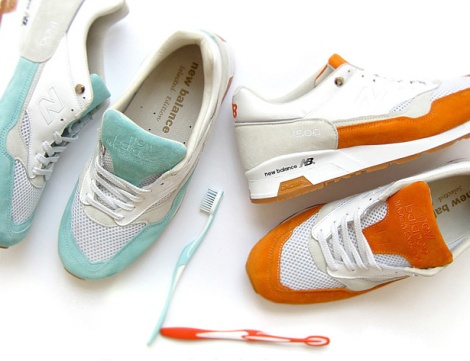 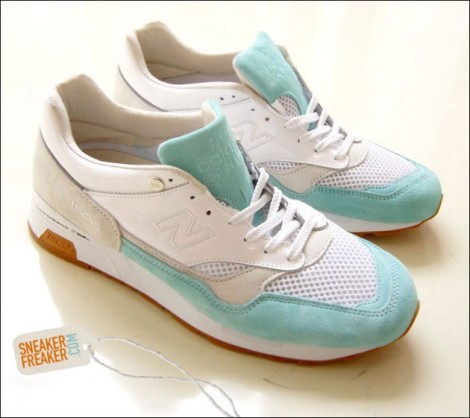 In 2007, for the third year in a row, Solebox came together with New Balance and pulled together another stunning pack, and this time it was named the “Toothpaste Pack”. As you might of been able to guess from the name, the shoes draw inspiration from toothpaste, which might seem weird, but it works, and works well! Each colour way represents a flavour of toothpaste, mint and orange, with a mix of suede, patent leather, the return of the mesh last used on the GGB, and a gum sole.

The “Toothpaste Pack” is one of those shoes that you know about even if you’re not into New Balance, or know about Solebox, it seems to appeal to almost everyone interested in trainers.

There were 216 pairs of each shoe, and every pair also came with individually numbered studs beside the top eyelet, as well as a matching Solebox branded toothbrush.

As you may know, the Solebox brothers were born in Berlin, but they have proud Turkish roots, and these shine through in the 2008 collaboration with New Balance, the “Nazar Eye”. The term “Nazar Eye” also known as “Evil Eye”, is said to protect you from envy/evil, and is mainly based in Turkish culture, however, is common within many other religions in cultures.

The shoe itself is a premium Made in England 1500, with soft black tumbled leather on the upper, with suede panels, black mesh toe box, and a grey mudguard. There is light blue stitching for the 1500 and NB heel branding to match the colours of the eye, and the 1500BGT is finished off with a white midsole and gum outsole. Everyone loves the little details, and there is a hint of 3M at the tip of the toe box, Solebox lace locks, and of course, the famous “Nazar Eye” in the form of a lace jewel.

Check out the following short interview at the time of the release.

As the name suggest, the New Balance x Solebox “Finals” Pack was to be the finale, certainly as far as collaborating on the Made in England 1500 is concerned. Essentially, Hikmet revisted the first time the brands collaborated (1500GGB), but to avoid copying the first release, the Finals pack consists of two pairs of 1500’s, the 1500MSB, which has a maroon heel sold exclusively at Solebox and limited to just 350(?) pairs, and the 1500GSB, which has a forest green heel and was available outside of Solebox at select NB retailers for the first time. The shoe uses a mix of nubuck, leather and mesh, all sat on top of that lovely gum sole which Solebox became so well known for using, and also sets the release apart from the GGB.

So, that brings us to the end of the New Balance x Solebox collaboration history, but rather than just leaving it there and hoping for future collaborations between these two, let’s take a look at some pictures of samples.

I found a lot of these pictures on the Sneakers.fr forum, so have linked them to there, so thanks to those who compiled the images over the years. 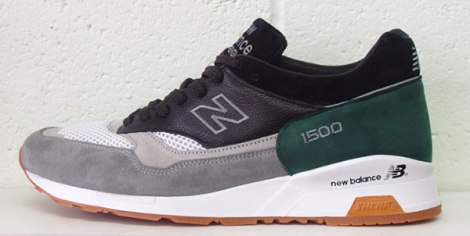 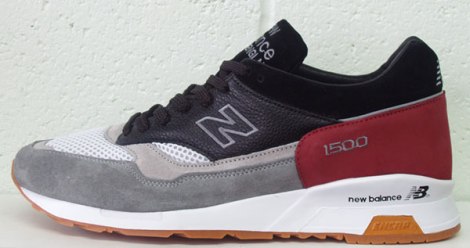 This 576 sample has a very similar colourway to the Nazar Eye 1500, so maybe this was potentially a sample for that collaboration. 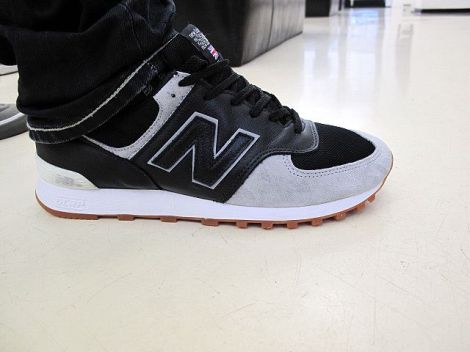 These three 575’s were done roughly around the time of the ‘Purple Devil’ release, but nothing ever came of them and in the end, the red/white 575 was given away in an auction by Slam x Hypebeast.

With the Purple Devil Pack having three shoes, it was inevitable that there were going to be a lot of samples, so take a look at all the various samples below. 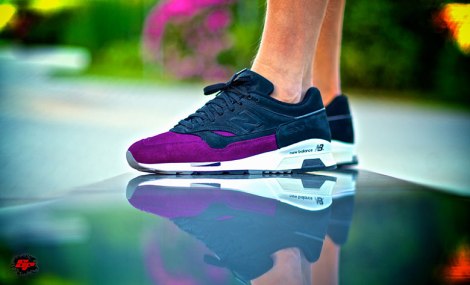 This is a particularly nice triple Solebox branded pair, and going by the two pictures, it is only branded on the left shoe; 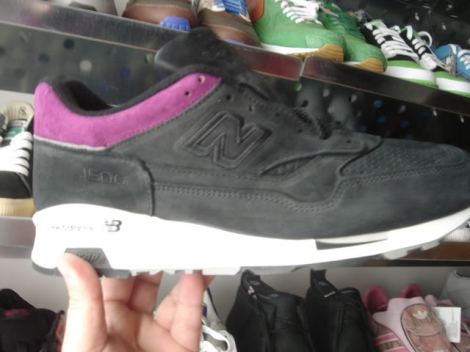 This is quite a nice 670 sample that got dropped, and as far as I’m aware, Hikmet still has this pair and has had it for sale at various events; 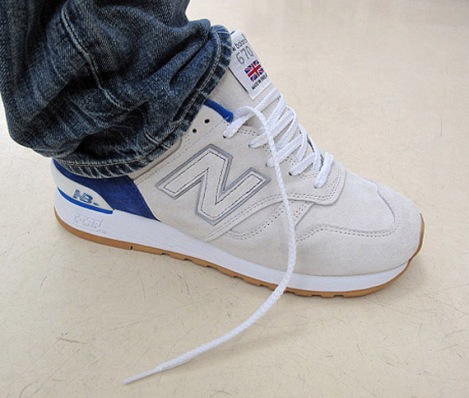 The New Balance 1500GGB 1of150 was the favourite Solebox release for many, and the Solebox brothers obviously have some personalised pairs; 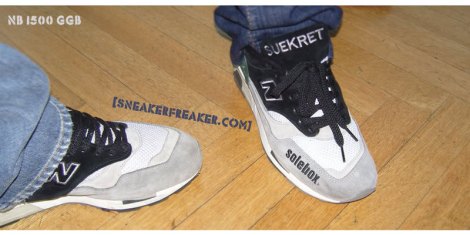 This next pair looks like it maybe could have been a sample for the 1500GGB, but I’m not sure; 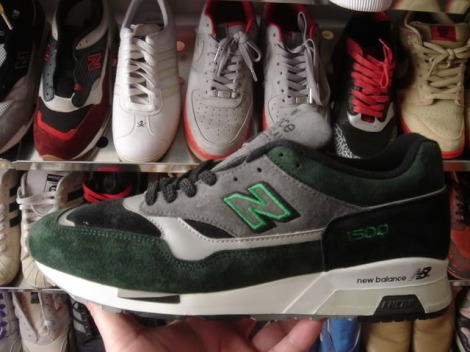 This pair is a personal pair of Hikmet’s with some Solebox branding and “One of One” branding on the tongue and heel.

There have been various Toothpaste pack samples appear over the years, and I’ve tried to gather all the ones I’m aware of below. I’m sure you’ll agree that some of these are better than the two released pairs!

This pair is the closest to the released version, but apparently it has a different mesh;

The next two pictures are of the same white/red sample pair; 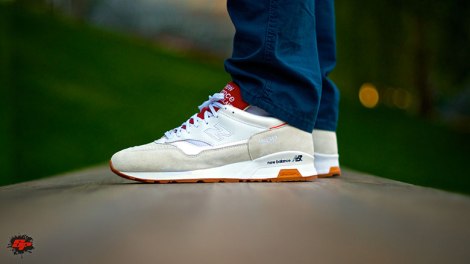 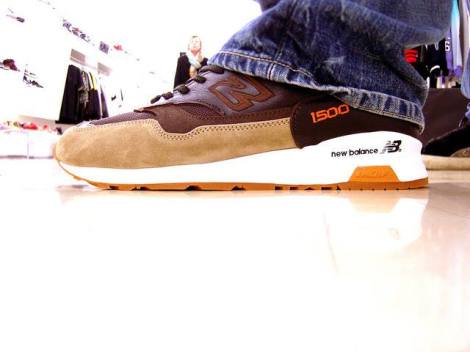